We present you three pictures which received the majority of votes in the contest for music lovers: “Philharmonic…. In your photograph”.

1st place was given to the picture of smiling musicians of Poznan Philharmonic Orchestra and equally pleased Carl Davies – famous British conductor and composer who led our Orchestra for the 2nd time during one of the outdoor concerts which usually gather thousands of listeners.

2nd place was awarded to the photo entitled “Our Great Resident and My Son – His Big Fan”. The author of the picture captured the moment when one of our young music lovers (and at the same time an admirer of the remarkable composer’s talent) approaches Rafał Blechacz, artist-in-residence of Poznan Philharmonic, right after he finished playing a musical piece.

3rd place was given to the photograph of the pipe organ in AMU Concert Hall – beautiful auditorium built over a hundred years ago and known in Europe from its perfect acoustics, as well as splendid Neo-Renaissance architecture, in which Poznan Philharmonic Orchestra has the pleasure to perform for you – our music lovers.

We cordially congratulate the authors of the winning photographs and we all thank you for the sent pictures and for your full commitment in the voting. 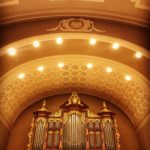