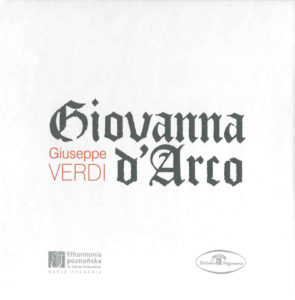 there is no such thing as a “bad” opera by Verdi. Even the worst of them (and each of us has his or her candidate…) will captivate the listener with the energy of musical narration, inspire with melodious invention, charm with instrumental detail. Each will also contain a gem, an aria, a duet, or a whole sequence to surpass everything written by the Master of Busseto’s rivals at the time.

Does it mean that we rate Giovanna d’Arco (première: Milan, La Scala, 15 Feb. 1845) among the composer’s “weakest” operas? By no means, and there are more reasons for this than just our conviction that the very question lacks sense. Like Haydn with his symphonies and string quartets, Verdi wrote operas all his life. Each of them constitutes not only an indispensable phase in his development, but also a step forward (1844: The Two Foscari), and a door open to the next stage of his career (1845: Alzira; 1846: Attila). With the brilliant title role tailored for one of the greatest opera singers of the time, Erminia Frezzolini, her two wonderful duets (with her beloved, king Charles, in act I, and with her father, Giacomo, in act III), spectacular crowd scenes, and brisk rhythms, the opera’s première proved a great success. It was played sixteen more times, and Milan organ grinders quickly added “hits” from the new piece to their repertoire. For the next quarter of the century, Giovanna d’Arco enjoyed a certain degree of popularity on European stages. Soon, however, it was to share the fate of other early operas by the author of Rigoletto, i.e. to fall into oblivion.

I believe it was caused not so much by its shortcomings, but… by our sullenness, for at the end of the 19th century we began to judge historical operas using criteria typical of the world of science rather than this of entertainment. Based upon a very simplifi ed tragedy by Schiller, the story of Saint Joan of Arc who falls in love with the beautiful king, gets betrayed by her father, and does not end at the stake, but dies a hero’s death on the battlefi eld, stood no chance. Unaware of great loss, we welcomed such works with ridicule or indignation.

Our production is the fi rst Polish staging of the opera with Polish cast (albeit with an Italian tenor cast in the role of king Charles VII). The audience of the Poznań Philharmonic has heard the concert version of Giovanna d’Arco, which grants the listeners’ imagination unadulterated freedom. In an era when directors’ infl ated egos mixed with stale prejudices towards the genre have them mock the libretto and show disdain for the music (as a result of which they often miss the meaning and style of a piece, i.e. its deepest identity), the concert performance lends it a new freshness. It is like a live recording: music resounds here and now; we can, however, close our eyes and in the privacy of our imagination, for our own purpose, create the theatrical ideal…