She was a doctor by profession. Pediatrician. Medicine was her passion. Her life’s mission, ho-wever, after the death of her husband Ryszard Kapuściński – the most brilliant writer among repor-ters and the most brilliant reporter among writers, as they used to say of him – was to keep his memory alive. Alicja Kapuścińska supported various projects, took part in the events reminiscenting the output of the author of The Emperor, organized competitions for young journalists.

She was fond of music as well. As long as she was in good health, she was eager to come to our Philhar-monic concerts. When she found it difficult to travel, she did her best to come to the performances of Poznan Philharmonic Orchestra held in Warsaw.

Her relationship with Poznan was special – she was the honorary member of the chapter of Ryszard Kapuściński Wielkopolska Prize, established during the writer’s lifetime. An unusual prize, granted not for literary or journalistic achievements, but for ”beneficence”. 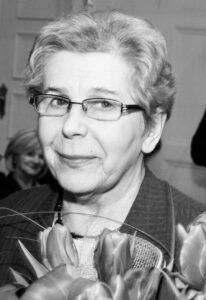