Although in the modern world the works of art from the 1920’s created by artists coming from the Soviet Union is now triumphing and shown in the most renowned museums in the world, the music from this epoch is still waiting to be discovered.

in the cycle presenting our fascination, and sometimes also inspiration for creating concerts repertoire, I would like to bring back the program of the concert, which was to be held last Friday, on the 13th of March. Besides well-known works of Beethoven and Prokofiev, also the music of Nikolai Roslavets was to be presented. His piece entitled „In den Stunden des Neumonds” has never before been performed in Poland.

Roslavets is the representative of the first generation of Russian composers, whose adolescence and the most creative period fell to the years of unusual development of art – the short period of avant-garde in the Soviet Union. It is a huge historical paradox of the 20th century that in the country who approved experiments in all artistic fields, not long afterwards the new political regime became the synonym of subjugation and totalitarianism. Avant-garde artists, who recently praised freedom (allegedly gained also for art), soon became the first victims of repression.

Although in the modern world the works of art from the 1920’s created by artists coming from the Soviet Union is now triumphing and shown in the most renowned museums in the world (I will just mention a few of the most famous names: Kazimierz Malewicz, Wassily Kandinsky, Natalia Goncharova, Marc Chagall, Lazar Lissitzky [El Lissitzky]), the music from this epoch is still waiting to be discovered.

The works of Roslavets didn’t appear in the program of the concert planned for the 13th of March by chance. We wanted to present the work of this revolutionary composer and remind that nowadays the music of Ludwig van Beethoven, apparently „softened and smoothed” by the perception shaped by pop-culture, at its time was a synonym of modern, breaching conventions and barriers of art, also the ones that seemed irrefutable.

We managed to have one rehearsal for the concert scheduled for the 13th of March. Roslavets’ music resounded. Along with the Orchestra of Poznan Philharmonic we had an impression from the first notes that the music transfers us to another dimension. Similarly like in the late works of Alexander Scriabin, we can hear the tutti sound intricately woven from the polyphonic layers, which reminds us of a musical stream, a spectrum of sound. The experience is hard to describe. What’s important, this type of narrative, present in some of the Prokofiev’s works, was practically abandoned by subsequent generations of composers. I recommend you to listen to Roslavets’ works available on the internet. I promise we will present you the premiere Polish performance of the aforementioned poem „In den Stunden des Neumonds”. Meanwhile you can listen to it on Youtube:

In our repertoire recommendations that we are going to present on the profile of Poznan Philharmonic for listeners interested in this topic, I would like to recommend a few albums, which you may be able to listen to via websites (or maybe you have them in your personal collections). They are the renditions of works by composers from Roslavets’ generation, now almost entirely forgotten. Maybe in the current situation it will be easier to find time for this activity:

Russian Futurism – box released by ARTE NOVA (unfortunately, the company doesn’t exist anymore) features recordings of chamber and symphonic music of such composers as: Alexander Mosolov, Alexander Goedicke, Julian Krein, Georg Kirkor, Mikhail Gnesin, Lev Knipper and Nikolai Roslavets;
Symphony No. 1, Op. 7 by Gavriil Popov performed by London Symphony Orchestra led by Leon Botstein, conductor known to the listeners of Poznan Philharmonic; on the album published by TELARC label there is a most interesting piece Theme and Variations Op. 3 by Dmitri Shostakovich;
finally, the lovers of audiophile sound I would like to recommend an album released by ECM, dedicated to the piano works of Alexander Mosolow (Herbert Henck on the piano).
Wishing you poignant perception of this extraordinary music, 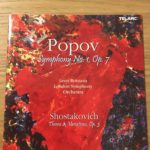 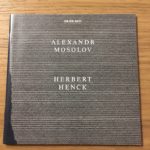 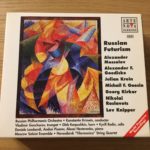