Next Friday, on the 10th of April, this time uniquely at 3 p.m. we invite you to listen to Symphony No. 3 “Symphony of Sorrowful Songs” for soprano solo and orchestra, Op. 36 by Henryk Mikołaj Górecki. It was recorded by Poznan Philharmonic Orchestra during the concert held on the 4th of February 1995 in AMU Concert Hall in Poznan. The recording is in the form of an album. It was produced by DUX label, but hasn’t been released until 23 years later – on the 10th of January 2018. Symphony No. 3 previously resounded in AMU Concert Hall on the 18th of January 2019 during the concert commemorating Paweł Adamowicz, the murdered mayor of Gdansk.

Symphony No. 3 by Henryk Mikołaj Górecki is one of the most original masterpieces of the 20th century music (not only Polish). Adrian Thomas, the English biographer of the composer, wrote these words about the piece: “… The Symphony features a prayerful, transcendental aura supported by simplicity and straightforwardness. It evokes the ambience of concentration and inclines to quiet contemplation…”

The lyrics of the three movements are three laments, monologues – the 15th century lament of Virgin Mary to the dying Jesus, the prayer of a girl to Mary, engraved in the wall of the prison cell in the Gestapo headquarters in Zakopane during World War II, and a mother’s grievance after the death of her son in one of the Silesian Uprisings. Following subsequently, the lyrics plainly determine the piece the passage from divine to human things, from metaphysics to earthly reality.

“Symphony of Sorrowful Songs” is an exceptional piece to listen to just on Good Friday. 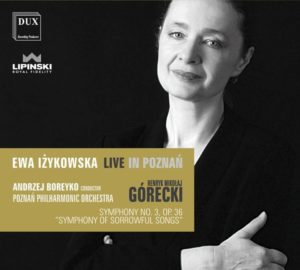