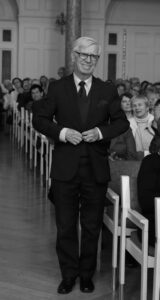 It was only yesterday that we appended the Friday concert programme book with his minor corrections. He had a good way with words and excellent journalistic competence: an editor with the Express Poznański for over four decades, he climbed the career ladder all the way to the position of editor-in-chief of this once popular evening paper.

Retired for several years, he never stopped writing. Particularly, about his beloved music, as he could not imagine life without it. Associated with Henryk Wieniawski Musical Society, he co-organised the Wieniawski Competitions. He had a permanent seat at philharmonic concerts in the University Auditorium, and unless illness or some extraordinary event stood in his way, he was always there.

Sixty-one years ago, it was him to have thought up the Poznań Concerts; and he was very proud of them. In the early-January, when we celebrated the sixtieth anniversary of musical meetings that no other place in Poland has seen, he talked from the stage about the beginnings of this concert series, remembered the first Poznań Concert, and thanked all those who contributed to their organisation over the six decades. And musicians and music-lovers thanked him for the very idea that has been developing so splendidly.

He was looking forward to the 500th Poznań Concert, which will be held on Friday, on the night of 4 November. He wrote a special text about his “musical child” for the concert programme. And closed it with words that sound almost like his last will today:

The Poznań Concerts were born in a different world. There is no Express anymore, gone are the-then trade unions, gone are a number of us who remembered the premiere event and lived to see the 500th edition of the still much-needed musical meetings. Singing the joyful Magnificat, we harbour hope that although born in the previous century, the event is still very much alive, and is yet to see many a round anniversary.

Romuald Połczyński died on 2 November 2022. We shall miss him.