On Saturday, the 28th of March, at 8 pm on air of Polish Radio Program II “The Pariah”, the opera of Stanisław Moniuszko will resound, played by the Orchestra of Poznan Philharmonic. Its concert performance (in the Italian-language version) was recorded on the 10th of March 2019 during the 23rd Ludwig van Beethoven Easter Festival in the National Philharmonic in Warsaw. The Saturday program, part of the “Opera Under the Stars” cycle, will be led by editor Marcin Majchrowski.

“The Pariah” under the leadership of Łukasz Borowicz, performed by Poznan Philharmonic Orchestra along with the soloists and the National Philharmonic Choir, was also recorded on CD. The album was released by DUX label. The festival performance of the piece and its recording was connected with Poznan Philharmonic’s celebrations of the Year of Stanisław Moniuszko.

“The Pariah” is the last completed opera of Stanisław Moniuszko. The libretto of this three-act work, the action of which takes place in India, was written by Jan Chęciński and based on the motives of Casimir Delavigne’s tragedy under the same title. 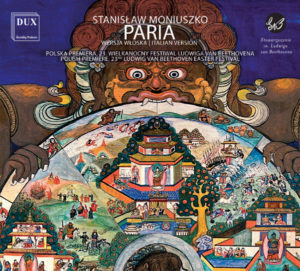