Marek Woźniak, the Marshal of the Wielkopolska Region, presented the new chief musical director on the Friday press conference.

– ‘We have got together to officially announce magnificent news concerning the new season of the Poznan Philharmonic. Along with its beginning the position of the music director – chief conductor of the Poznan Philharmonic Orchestra will be taken up by Łukasz Borowicz, who has been cooperating with our Philharmonic for many years through great concerts and recordings’, said Marek Woźniak. ‘We are extremely happy that among many other interesting proposals Łukasz Borowicz has chosen Poznan. For us it means high quality of the artistic offer.’

– ‘When years ago I talked with Kazimierz Kord, one of the greatest Polish conductors, he told me that you could count on one hand the number of conductors who have “sound in their hands”. Łukasz Borowicz was one of them’, recalled Wojciech Nentwig, the Director of the Poznan Philharmonic. ‘I took his advice and we outreached Łukasz Borowicz’.

During the conference Łukasz Borowicz shared his vision of conducting and working with an orchestra. He also highlighted the role of Poznan as a philharmonic center on the musical map of Poland and Europe.

– ‘Poznan Philharmonic is a globally recognized brand. We know from artists and their agents that those who come here, wish to return – because of the orchestra, the audience, the atmosphere accompanying their performances’, said Łukasz Borowicz. ‘The tough pandemic times we have survived strengthened us by dealing with numerous artistic challenges and overcoming barriers we had no idea of. For me the most important thing is that in the Poznan Philharmonic I can make my dreams come true: I have been doing it, along with the orchestra, uninterruptedly since 2006, since the memorable concert with Ida Haendel.’ 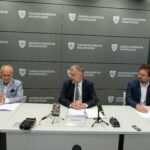 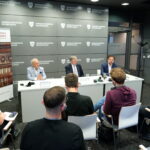 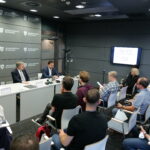