In relation to the Beethoven Festival, we will not meet today in the AMU Concert Hall but, for the next time, on the internet concert.

This time we are going to present a one-act opera by George Bizet – “Djamileh”. Its concert performance was held on the 7th of April 2017 in National Philharmonic in Warsaw at the 21st Ludwig van Beethoven Easter Festival in the framework of the “Unknown Operas by Well-Known Composers” cycle, and repeated on the 9th of April 2017 in AMU Concert Hall. This opera, performed by Poznan Philharmonic Orchestra, soloists and Poznan Chamber Choir led by Łukasz Borowicz was also recorded – the premiere of the album released by the DUX label took place on the 26th of October 2017.

“Djamileh” (with the libretto by Louis Gallet) is a love story between the title slave Djamileh and Cairene sultan Haroun. The plot, held in the ambiance of “The Arabian Nights”, is a typical example of the romantic fascinations of the Orient in the 19th century. And though the composer himself saw it as difficult to be staged, he succeeded in balancing the flaws of the libretto by the expressive sound aura. 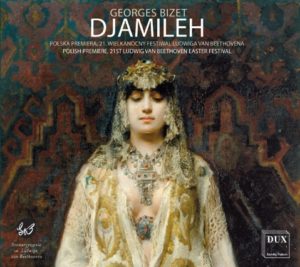