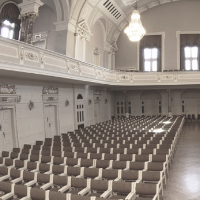 We are pleased to announce that the next concert, on the 12th of February at 7 p.m., will be held in the AMU Concert Hall with audience participation. The program includes the works by Ludwig van Beethoven and the Poznan Philharmonic Orchestra will be led by Marek Pijarowski.

According to the decision of the Governmental Crisis Management Team, during the event only half of the auditorium can be filled. While staying in the building of the AMU Concert Hall keeping the sanitary measures is mandatory, including wearing a mask covering both your nose and mouth.

The concerts with the audience participation are held until the 26th of February (check below for the schedule). The opening of philharmonies, theatres and cinemas to the audience is conditional and lasts, so far, two weeks. The decision to either prolong it or once again close the institutions will be made by the Governmental Crisis Management Team.

Until the 26th of February the ticket office of the Poznan Philharmonic is opened from Tuesday to Friday between 1 p.m. and 5 p.m., as well as an hour before each concert.

VIOLIN AND THE HEN

The program includes the Symphony No. 2 in D major, Op. 36, by Ludwig van Beethoven